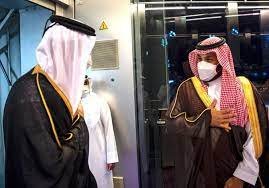 Upon his arrival at King Abdulaziz International Airport, the Qatari Emir was received by Crown Prince.
Saudi Arabia’s Crown Prince Mohammed bin Salman received on Tuesday Qatar’s Emir Sheikh Tamim bin Hamad Al Thani to Jeddah in first visit after January’s AlUla GCC declaration, Saudi Press Agency reported.
The meeting highlights how ties between the neighbours are improving following a decision earlier this year by Saudi Arabia to end its more than three-year-long embargo of the Gulf state.
Qatar’s Emir was last in Saudi Arabia for a high-level Gulf Arab summit that took place in January and which concluded with a declaration to ease the rift.
The Crown Prince invited Sheikh Tamim to a session in Jeddah's Al Salam Palace. During the session, they reviewed the brotherly relations between the two countries, aspects of bilateral cooperation.

Replay 1971 In UAE: Senior Citizens Take Kt Back To When 7 Emirates Became...