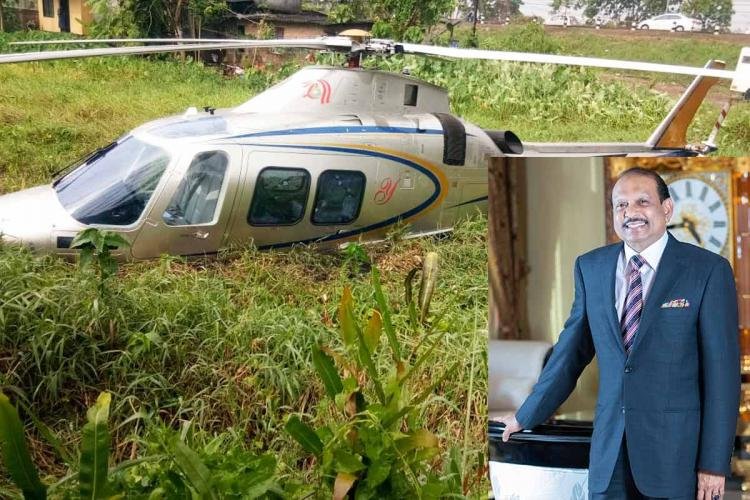 Lulu Group official says the aircraft had to make an emergency landing because of the adverse weather conditions.
A helicopter carrying Indian business tycoon M.A. Yusuff Ali, and six others, made an emergency landing in Kochi, Kerala, confirmed top officials at Lulu.
Yusuff Ali, chairman and managing director of UAE-based Lulu Group International, was in the private helicopter that belly-landed in a swamp at Panagad near the Kerala University of Fisheries and Oceanic Studies early Sunday morning.
V Nandakumar, director, marketing and communications at Lulu Group International, told Khaleej Times: “Fortunately, he (Yusuff Ali), his wife Shabira, personal secretary Shahid PK, the pilot and co-pilot are all perfectly safe. He was on his way to meet with his uncle, who is undergoing treatment at a hospital.”
Nandakumar said the pilot of the helicopter decided to make an emergency landing due to poor weather conditions. “It was a precautionary, emergency landing; not a crash landing like how some media are calling it.
“The closest place was this wet land, and the pilot believed it would be safest to land the aircraft on this patch of land to ensure safety of the passengers as he could not continue flying the chopper in the rainy weather,” he said.
Yusuff Ali and accompanying passengers are undergoing precautionary medical check-up at Lakeshore Hospital in Kochi.
“He (Yusuff Ali) travelled to Kochi after the Abu Dhabi awards for very personal reasons... Also, since Ramadan is approaching, he usually takes a trip to India during this time,” Nandakumar added.