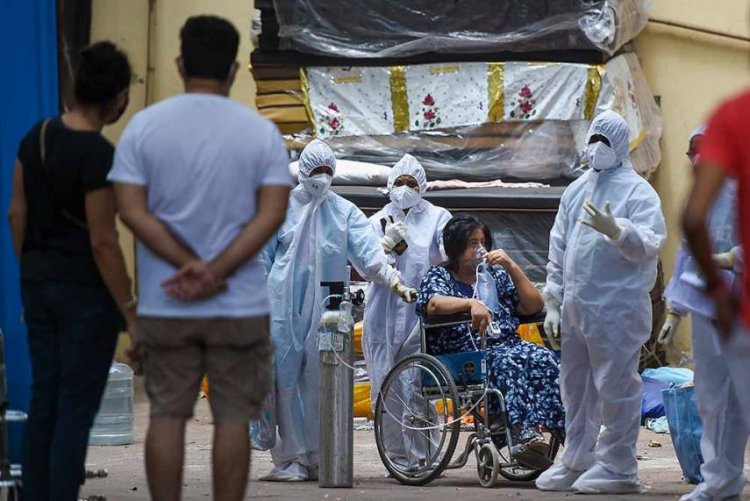 World leaders have also postponed their visits to the country.
With India buckling under a deadly second wave of the coronavirus crisis and hospitals in the country running out of beds and oxygen supplies, countries across the world have announced travel bans and restrictions to prevent the spread of Covid-19.
The UAE has become one of 14 countries to announce a suspension on incoming flights from India. It was announced that the UAE would be suspending all inbound flights effective Saturday, sparking a demand for last minute tickets and causing many residents to worry for their loved ones stuck in the country.

India recorded more than 2,000 Covid deaths on Wednesday and almost 300,000 new cases, among the world's biggest daily totals since the pandemic began, official data showed.
In an address to the nation on Tuesday night, Prime Minister Narendra Modi said that the country of 1.3 billion people was "once again fighting a big fight".
In the wake of the ongoing Covid situation, world leaders have also had to reconsider their trips to the country. UK premier Boris Johnson cancelled his visit for the second time on Monday, while Japanese Prime Minister Yoshihide Suga announced he was postponing his trip originally set for the end of April.
Here's a list of countries that have imposed travel bans and restrictions on passengers from India so far:
1. Pakistan
Pakistan on Monday, April 19, imposed a ban on travellers from India through air and land routes for the next two weeks due to a double-mutant variant of the virus in the neighbouring country.
The National Command and Operation Centre (NCOC) said it would carry out a review of countries placed in Category C on April 21, in view of the presence of the Indian variant in other countries.
2. The USA
On Monday, April 19, Americans too were advised to avoid travelling to India due to the “very high level of Covid-19” present in the country.
“Because of the current situation in India, even fully vaccinated travellers may be at risk for getting and spreading Covid-19 variants and should avoid all travel to India,” said the US Centre for Disease Control and Prevention (CDC).
3. The UK
Boris Johnson's government on Monday, April 19, announced a travel ban on arrivals from India from 4am on Friday, following the detection of over 100 cases of the Indian variant of Covid-19, health secretary Matt Hancock announced in the House of Commons.
The Indian variant is considered to be fast-growing in the United Kingdom, where the number of new infections, hospitalisations, and deaths have fallen in recent days and weeks.
4. New Zealand
New Zealand Prime Minister Jacinda Ardern announced on April 8 that the country had temporarily suspended entry for all travellers from India, including its own citizens, following a high number of positive coronavirus cases arriving from India.
The suspension started on April 11 and will be in place until April 28.
5. Hong Kong
Hong Kong suspended flights from India, Pakistan and the Philippines from April 20 for two weeks after the N501Y mutant Covid-19 strain was detected in the Asian financial hub for the first time, authorities said in a statement late on Sunday, April 18.
The three countries were classified as “extremely high risk” after multiple imported cases carrying the strain into Hong Kong were discovered in the past 14 days, the government said.
Airlines impacted by Hong Kong’s ban on travellers from India, Pakistan and the Philippines include carriers such as Cathay Pacific, Hong Kong Airlines, Vistara and Cebu Pacific.
6. Singapore
According to the South China Morning Post, Singapore will ban entry to all non-residents travelling from India from April 24, as it faces a new infection cluster among its largely South Asian migrant worker community that has raised fears of reinfection among recovered coronavirus patients.
From 11.59pm on Friday, April 23, all long-term pass holders and short-term visitors with recent travel history to India within the last 14 days will not be able to enter or transit through Singapore, including those who have obtained prior approval, authorities said on Thursday, April 22.
7. Oman
Oman has suspended travel from India until further notice, Oman News Agency reported on Wednesday, April 21. The decision was taken by the Supreme Committee to curb the spread of Covid-19.
In a statement, Oman banned passengers travelling from India, Pakistan and Bangladesh or transiting through these three countries. This will come into effect starting at 6pm on April 24 until further notice
8. France
France announced new entry restrictions on travellers from India on Wednesday, April 21, to fight a contagious coronavirus variant. The restrictions to be effective from Saturday include a mandatory 10-day quarantine with police checks to ensure people arriving in France observe the requirement.
9. UAE
All flights from India to the UAE will be suspended for 10 days from 11.59pm on April 24, the General Civil Aviation Authority (GCAA) and the National Emergency Crisis and Disasters Emergency Management Authority (NCEMA) announced on Thursday, April 22. All inbound flights for national and international carriers coming from India will be affected.
The travel ban includes inbound transit passengers with exception of transit flights coming to the UAE and heading to India, the GCAA said in a statement.
10. Saudi Arabia
Saudi Arabia’s ban on international flights from 20 countries will stay, including India, even after May 17, when the kingdom will resume international flights.
This was announced by Saudi daily Arab News on April 22, quoting Saudia, the country’s national carrier.
11. Canada
Canada announced a ban on passenger flights from India and Pakistan on April 22.
All commercial and passenger flights from India and Pakistan will be halted. However, cargo flights will continue, ministers said at a joint virtual Press conference.
12. Kuwait
Kuwait's directorate general of civil aviation said early on Saturday in a tweet that it had suspended all direct commercial flights coming from India, effective April 24 and until further notice.
All passengers arriving from India either directly or via another country will be banned from entering unless they have spent at least 14 days out of India, the statement said.
13. The Netherlands
On April 26, the Netherlands said it was suspending all passenger flights arriving from India starting on Monday amid a surge in coronavirus infections in the country.
"A flight ban will take effect for passenger flights from India at 6pm on Monday, April 26... The flight ban will be in place until at least 1am on May 1," said a Dutch Aviation Ministry statement.
14. Thailand
Thailand has suspended issuing travel documents from India over concerns of imported coronavirus cases.
The announcement came on Monday, April 26, as more venues were closed in Bangkok as part of efforts to contain a third wave of infections in the Southeast Asian nation.