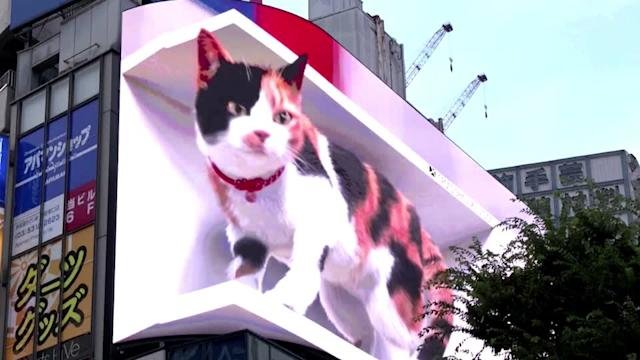 With first looks, it appears that a giant cat is moving at the top of a building, only to emerge later that it is the biggest 3D billboard in Tokyo, showing a feline prancing on the LED screen.
The Shinjuku district is known to be the busiest neighborhood in Tokyo and now, one of the largest billboards in the area hosts a large cat on it!
A video has gone viral where a mammoth feline is seen slightly prancing on the LED screen atop a building. The screen 1664 sq. ft and is curved in shape. The image is 3D with 4K resolution, which makes it look absolutely realistic as if a cat this big is actually emerging on the screen, ready to break out from it.
The video was shared with a caption: “This is a video taken locally around 3:30 pm today. The crowd is unexpectedly noisy, so I have to adjust the volume of my voice. Be careful of the volume during playback!”
According to a report, this appears in between the advertisements that are played on the screen and the timings are 7 am to 1 am. In the beginning, it is shown that it is ‘startled’ awake after which it goes by its business by meowing around and trying to distract the daily commuters. In the end, it goes into ‘deep slumber’