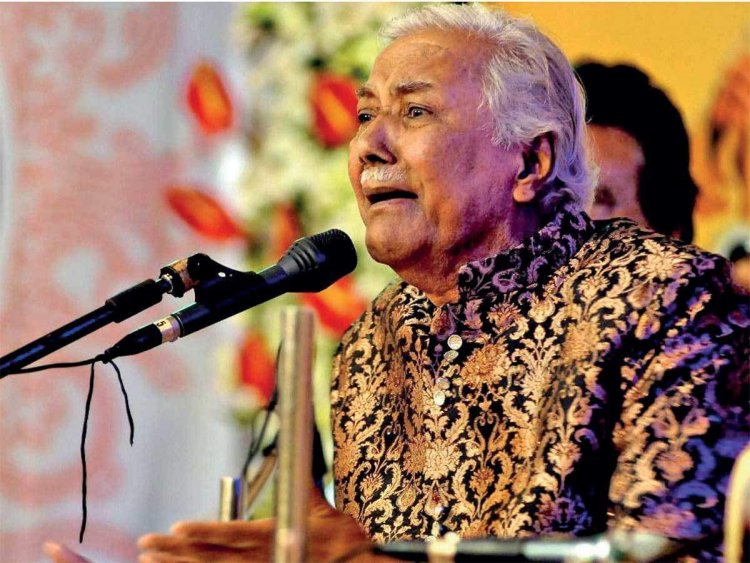 Celebrated musician was a guru to Asha Bhosle, A. R. Rahman, Hariharan and many other Indian musicians.
Legendary Indian classical musician and Padma Vibhushan awardee Ustad Ghulam Mustafa Khan passed away at his Mumbai residence on Sunday afternoon.
The celebrated musician breathed his last at 12:37 pm. Khan was an Indian classical musician in the Hindustani classical music tradition, belonging to the Rampur-Sahaswan Gharana. He was a receiver of several accolades including the Padma Shri in 1991, followed by Padma Bhushan in 2006 and Padma Vibhushan in 2018.
ANI spoke to Namrata Gupta Khan, daughter-in-law of the departed artist who told, “He had a brain stroke on October 15, 2019, and his right side got paralysed. We had an entire ICU set up at home. In 2019 he got discharged. Since then he didn’t have any problems.”
She told that he was very active for a few days, used to watch TV and also understand whatever the family members used to communicate to him. He used to nod and reply.
“But, today I don’t know, what happened, the nurse was doing his massage and he vomited. The nurse called me and I ran. No doctor was taking the calls. When I used the saturation machine, it went down, and after five minutes he stopped breathing. I used the stethoscope, to see his heartbeat but then I realised he is no more,” Namrata added.
The last rites with state honour was performed at Mumbai's Santacruz cemetary on Sunday evening .
Prime Minister Narendra Modi on Sunday expressed grief over the demise of Ustad Ghulam Mustafa Khan.
“The passing away of Ustad Ghulam Mustafa Khan Sahab leaves our cultural world poorer. He was a doyen of music, a stalwart of creativity whose works endeared him to people across generations. I have fond memories of interacting with him. Condolences to his family and admirers,” Prime Minister Modi tweeted.
Other celebrities also joined in to pay tribute to the late musician.
Melody Queen Lata Mangeshkar paid an emotional tribute to the legend by posting a picture of him and wrote, “I have just received the sad news that the great classical singer Ustad Ghulam Mustafa Khan Sahab is no more in this world. I feel very sad to hear this. He was not only a good singer but also a good human being. My niece has also learned music from Khan Saheb, I had also learned a little music from him. There has been a lot of loss of music due to his departure. I offer my humble tribute to him.”
The Oscar-winner musical maestro AR Rahman also mourned Khan’s passing away and shared an old video of him singing one of his composite songs. “The sweetest teacher of all ..May the Ghafoor-ur-Rahim give you a special place in the next world #UstadGhulamMustafa,” his tweet read.
Film director Hansal Mehta wrote, “My teacher. Guru to a student who just wouldn’t stay on. Great teacher. Great artist. Hindustani Classical Music has been bereaved. His students have been orphaned. I have been orphaned. RIP Ustad Ghulam Mustafa Khan Saab. Stay strong brothers Murtuza, Qadir and Rabbani.”