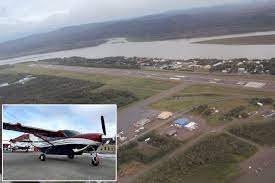 In a shocking incident, an 18-year-old boy grabbed the control of a commercial flight mid-air with five other passengers on board and sent it into a nosedive towards the ground before the pilot regained control of the aircraft in US’ Alaska.
According to the details, Jaden Lake-Kameroff, 18, was a passenger aboard the small Cessna Caravan aircraft flying from Bethel to Aniak on Wednesday.
He got up from his seat when the plane was around eight kilometers away from Aniak airport and grabbed the control of the plane, sending it into a full nosedive towards the ground. The plane was roughly 1,000 to 1,500 feet above the ground at that time.
Earlier, he asked the pilot to fly the plane earlier during the flight and initially asked to sit in the unoccupied copilot seat. But the pilot denied both of his requests.
The pilot, however, managed to regained the control with help from the other passengers and saved the lives of the passengers, New York Post reported.
Thankfully, the plane landed safely in Aniak, which is about 90 miles northeast of Bethel. The teenager was taken into custody by the security officials as soon as the plane landed. State troopers said the teenager was trying to end his life by crashing the plane.