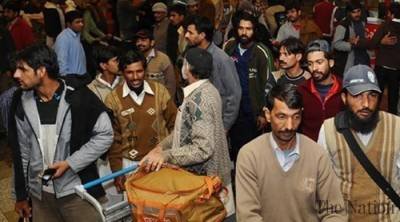 Sources say 30 of the 42 people left the country on exit permits, while the remaining 12 had regular Pakistani passports.

?Three of them had no previous travel recording, thus implying they must have left the country before Integrated Border Management System (IBMS) was imposed or through land routes.?

The deportees have been handed over to the Anti-Human Trafficking Cell (AHTC) department of the FIA for further investigation.

The FIA on Tuesday imposed a fine of Rs7.5 million on different foreign airlines for violating visa rules.

On the directives of Interior Minister Chaudhry Nisar, all foreign airlines have been told not to carry any person into Pakistan who does not have a visa. To effectively pursue the case, heavy fines have also been imposed on airlines which have violated the rules in this regard.