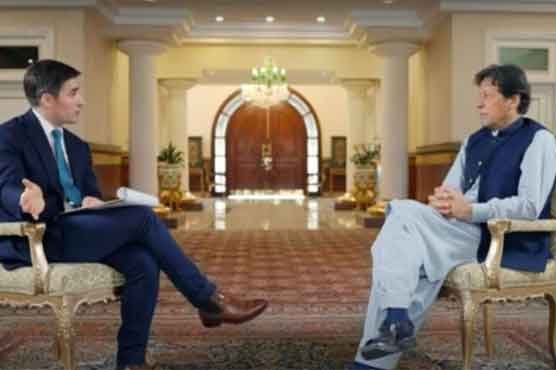 ISLAMABAD: Prime Minister (PM) Imran Khan has said Pakistan would not allow the United States (US) to use its bases for cross-border military actions after American forces’ withdrawal from Afghanistan.
In an interview with a US TV HBO Axios, Imran Khan said Pakistan suffered a lot due to war in Afghanistan.
When asked if Islamabad would allow the Central Intelligence Agency (CIA) to conduct cross-border counter-terrorism missions in Afghanistan, he replied: “Absolutely not.”
“There’s no way we are ever going to allow,” the premier stated in clear terms. “Any bases, any sort of action from Pakistani territory into Afghanistan, absolutely not.”
The United States has said it will withdraw all its troops from Afghanistan on Sept. 11 after a two-decade presence.
He said more than 70,000 Pakistanis were martyred during the war against terror after 9/11 attacks. “Islamabad is not interested to become part of any other conflict.”
The premier said Pakistan’s nuclear program is for defense purposes only and we do not have hostile designs against any of the countries including India.
Replying to a question, PM said China has been one of the greatest friends to us in our most difficult times. When we were really struggling, our economy was struggling, China came to our rescue.
On COVID-19, Prime Minister Imran Khan said partial lockdown coupled with comprehensive data analysis helped Pakistan to keep the Covid-19 pandemic under control.
He said there were more than seventy per cent informal economy workers and daily wagers and the government could not make the decision to force a complete clampdown in the country.
He said National Command and Operation Centre performed actively and coordinated with all institutions for the implementation of Standard Operating Procedures.