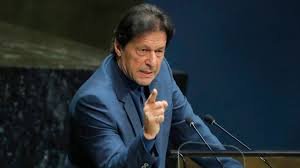 Prime Minister Imran Khan on Friday told the world that insulting to Holy Prophet Muhammad (Peace Be Upon Him) gave pain to the Muslims and called for not using the freedom of speech to insult the Prophet (PBUH) to hurt his followers.

The Prophet (PBUH) lives in our hearts. When he is ridiculed, when he is insulted, it hurts us. As we humans know. that pain of the heart is far more hurtful than the physical pain. And that is why the Muslims react, the prime minister told the world leaders while addressing the United Nations General Assembly.

He said he had always thought of explaining the subject to the world community, especially the Western community who did not understand the religion as the Muslims did.

That's all we ask. Do not use freedom of speech to cause us pain by insulting our Holy Prophet. This is what we want, the prime minister said while referring to the sensitivity Jews showed to the holocaust which also gave them pain.

He said after 9/11, Islamophobia grew alarmingly in the West, which was marginalizing the Muslim communities and could also radicalise them. There is only one Islam. What is radical Islam or Islamic terrorism. Terrorism has nothing to do with any religion, he said. He said the use of phrases like Islamic terrorism and radicalism were the main reasons behind Islamohobia, which had caused pain to Muslims.

He said the world must address the issue, though unfortunately even the Muslim leaders did not address it either.

The prime minister said instead of addressing the issue, the Muslim leaders proclaimed as liberals and coined a new term of enlightened moderation.

He said if any Muslim society carried out injustice on the minority, it was in fact violating the Islamic teaching