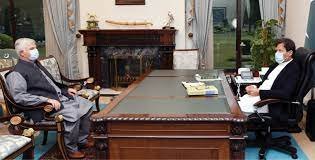 Punjab Governor Chaudhry Sarwar and Chief Minister Usman Buzdar held separate meetings with Prime Minister Imran Khan during his recent visit to Lahore on Monday, ARY News reported.
During the meeting of PM Imran Khan and Governor Chaudhry Sarwar, the overall situation of Punjab was discussed.
In addition, the governor congratulated Prime Minister on victory in Azad Jammu and Kashmir (AJK) elections.
Chaudhry Sarwar apprised PM Khan of the confidence of Pakistanis abroad in the business-friendly policies of the government and said that the Pakistani community abroad would not only participate in the forthcoming Overseas Convention but is also showing great interest to invest in Pakistan.
The governor also paid tribute to the premier for the steps taken by the government for the protection of minorities’ rights and apprised him of the progress made in the ongoing rehabilitation work of the temple at Bhong.
During the meeting between PM Imran Khan and Punjab CM Usman Buzdar, matters pertaining to governance in the province, measures taken for the relief of common man, strategy to curb inflation and hoarding and progress on ongoing development projects were discussed.
CM Buzdar apprised the premier of the steps taken to improve the administrative structure of Punjab government, which PM Khan termed satisfactory.
PM Imran Khan was also briefed on the steps to ensure strict implementation of Covid SOPs during Muharram.
The chief minister also briefed the Prime Minister on the progress of construction and restoration work at the temple in Bhong and strategy to further strengthen the protection of minorities.