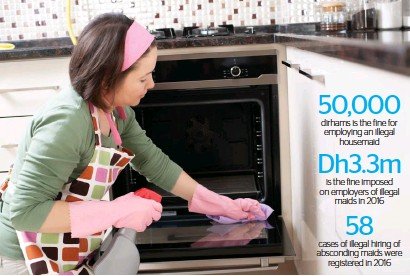 Matter comes to a head after police arrest domestic workers for working illegally.
Hiring domestic workers in the UAE through non-legal channels is a penal offence, as the move is a blatant violation of the Federal Labour law and could have disastrous consequences for an employer.
The matter has come to a head after Dubai Police recently announced that 17 domestic workers were arrested for working illegally in the emirate.
An employer could be in major legal trouble if he chooses to hire a domestic worker by glossing over the legal norms and taking an easy way out.
Karim Teleb, a UAE-based legal consultant, cited three primary reasons which spelt out how hiring an illegal domestic worker could portend trouble to an employer.
For instance, a domestic worker because of the illegal nature of the job doesn’t get to undergo the mandatory medical test.
Later, the worker may be found to be a carrier of a contagious disease that can infect the employer and his family members, including children.
To make matters worse since the worker doesn’t have a valid work permit, the person’s stay in the country is that of a wanted fugitive.
This makes the employer’s status untenable, as he stands accused of sheltering a wanted fugitive.
The Federal Labour law can punish an employer for hiring illegal domestic workers by imposing a fine between Dh50,000 and Dh5 million (m) and also a jail sentence.
The sum of the penalty will depend on how many illegal domestic workers were hired by the errant employer.
However, domestic workers can be hired in the UAE, and there is a legal way to do so, said Magdy Elbery, another legal consultant.
He said an employer can hire a domestic worker through Tadbeer, which is the only legal entity empowered to provide manpower for household work in the UAE.
Tadbeer is responsible for ensuring that a domestic worker possesses all legal documents, including medical tests, valid visa, Emirate's identity (ID).
On paper, Tadbeer is the sponsor for domestic workers.

Priyanka Chopra lambastes reporter Peter Ford for questioning her and...