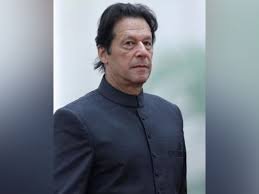 AJK ELECTIONS 2021: PM IMRAN KHAN ANNOUNCES REFERENDUM FOR INDEPENDENT STATUS OF KASHMIR ‎
ISLAMABAD: Prime Minister Imran Khan on Friday said his government would hold a referendum after the liberation of occupied Kashmir, seeking Kashmiris’ opinion if they wanted to stay with Pakistan or maintain an independent status, ARY NEWS reported.
Speaking during an AJK election 2021 rally in Tarar Khal, the prime minister said that the UN resolutions in 1948 gave rights to the Kashmiris to decide their fate.
“It is the Kashmiris who had to decide through a referendum if they had to join India or Pakistan,” he said adding that a day would come that sacrifices of Kashmiris would prove fruitful and they would decide to go with Pakistan rather than India.
After this referendum, Imran Khan said that his government would hold another referendum seeking the opinion of the people of the territory if they wanted to join Pakistan or maintain an independent status.
The prime minister further rubbished aside the impression given by PML-N leaders during the AJK election campaign that his government was planning to declare Azad Jammu Kashmir as a province.
“I do not know as to where it has come from,” he said in a campaign rally during the AJK elections 2021.
Imran Khan said that he has raised the Kashmir issue at global forums and would continue to do so.
“I will tell the world that Pakistan stands with its Kashmiri brethren in their struggle for independence,” he said while paying tribute to Syed Ali Geelani and Yasin Malik for their struggle against the atrocities committed in the occupied territory.
“I am giving a message to Yasin Malik to remain patient and steadfast as victory is near,” he said.