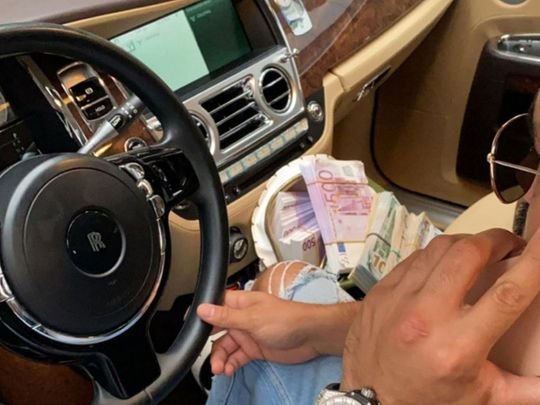 He posted the video to get more followers on Instagram.
A businessman in Dubai has been jailed and fined Dh200,000 for throwing fake Euro notes on a street. The European businessman had filmed himself throwing the fake 500 Euro bills, after which the video went viral.
He posted the video on social media to gain more followers on Instagram, the Dubai Court of First Instance was told.
In the video, he was seen driving to Al Quoz industrial area. He stops in front of a group of workers and throws the notes around. The workers are seen scampering to collect the notes.
The man admitted to committing the act to show that he led a lavish life.
After his arrest, he admitted to the police that he had managed to get 740,000 fake US dollars. He also claimed to have bought the Euro bills from an Asian for Dh1,000.
The said Asian was jailed after he was caught red-handed selling fake bills to an undercover police officer.

BABY MIX-UP AT KHANPUR HOSPITAL LEAVES PARENTS IN A FIX