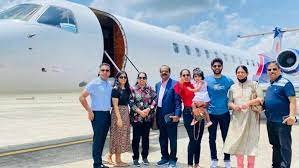 The ban on incoming passengers from India has been in place since April 25.
Amid fears that their Sharjah-based business would suffer permanent damage, an Indian family had to cough up more than Dh200,000 (US$55,000) to return to the UAE on a private jet, due to the travel restriction between India and the UAE.
A UAE resident for nearly four decades, PD Syamalan, managing director of Al Ras Group; his close family members; and four employees flew from Kochi in the south Indian state of Kerala and arrived at 2pm on Friday at Al Maktoum International Airport in Dubai.
Ajit Syamalan, CEO of Al Ras Group, told Khaleej Times the family had no other choice but to go on a jet as the entire senior management of their family business got stranded in Kerala. The family had travelled to Kochi to celebrate the wedding of Syamalan’s daughter Anju on April 25.
The 13-seater private jet carried Ajit, his parents, his in-laws, the newlyweds, and his family, including his two-year-old daughter. “My parents had departed from the UAE in the first week of March. My family and I flew to Kerala on April 15 for the wedding,” said Ajit.
“We decided the wedding a year ago and since Anju’s husband Siva Prasad works in France, postponing the wedding at the last minute would’ve been difficult,” he said.
The ban on incoming passengers from India has been in place since April 25.
Stranded Indian expats ready to pay Dh16,000 for private jet ticket
Four members of the company staff had also flown out from here, said Ajit. “Our business is strictly family-run. My mum is a director, my wife is a company CFO, and we play key roles. It was impossible to run the business from India,” he said.
When the possibility to return on-board a private jet came up, the family reached out to Smart Travels agency, determined to get back to the UAE.
“We are not focused on the money we spent; we are just happy to be back home. My wife, siblings, and I were all born and raised here. We feel the UAE is more of our home than India. When it comes to a wedding, we had to have it in India,” explained Ajit.
The family will now undergo quarantine in their villa in Sharjah for the next 10 days. “After 10 days, my sister and brother-in-law will fly back to France,” he added. “We also made it back in the nick of time, as a stringent lockdown has been announced in Kerala.”
Afi Ahmed, managing director of Smart Travels, the company that organised the journey, said: “The demand has quadrupled. So far, many flights have arrived from Delhi, Mumbai and Ahmedabad in terms of private jets. This is the first flight we operated from Kochi in Kerala.”
Afi added: “We are applying to the General Civil Aviation Authority to get the air-pooling system started as the demand is extremely high right now, especially among visit visa holders. Families here in the UAE want to bring their aged parents, and other members given the grave situation in India.”