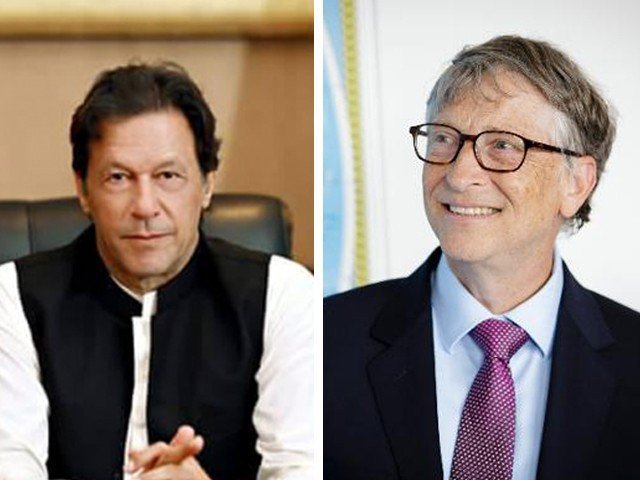 ISLAMABAD: Prime Minister Imran Khan spoke with Bill Gates, Co-Chair of the Bill & Melinda Gates Foundation, over telephone, the Prime Minister’s Office said Thursday.
Both exchanged views on the ongoing polio eradication campaign in the country as well as on Pakistan’s response to the public health challenges arising from the COVID-19 pandemic.
The prime minister Imran Khan appreciated the work of the foundation for the socio-economic uplift of the most disadvantaged people around the globe, especially for promoting universal access to health services and combating of infectious diseases.
He expressed gratitude, in particular, for its partnership with Pakistan to rid the country of polio.
PM Khan reaffirmed that polio eradication remained a key national priority for the government and earnest efforts were continuing to further intensify the anti-polio campaign across the country despite the challenges imposed by the COVID-19 crisis to make Pakistan a polio free country.
Recalling that a special polio eradication campaign was launched in the country earlier this month (June 7-11 ), during which vaccine drops were administered to over 33 million children under five years of age, he expressed his satisfaction over the substantive progress in cutting the transmission of the poliovirus in the country.
He hoped that polio will be eradicated soon with the support of all partners.
Bill Gates expressed his appreciation for the prime minister’s leadership for this national cause. While progress is encouraging, keeping up pressure will be the key to ending transmission for good, he added.
Besides, the premier highlighted Pakistan’s efforts to overcome the third wave of coronavirus in the country.
While alluding to Pakistan’s potential in the Information Technology (IT) sector and the government’s business friendly IT policy, he encouraged Microsoft to further expand its footprint in Pakistan.
Today’s telephone call follows the high-level Global Polio Eradication Initiative (GPEI) Polio Oversight Board (POB) delegation visit to Pakistan in early June, when Prime Minister Imran Khan met with POB leadership and had convened the National Task Force on Polio Eradication.